Note: This page was made public for archival purposes 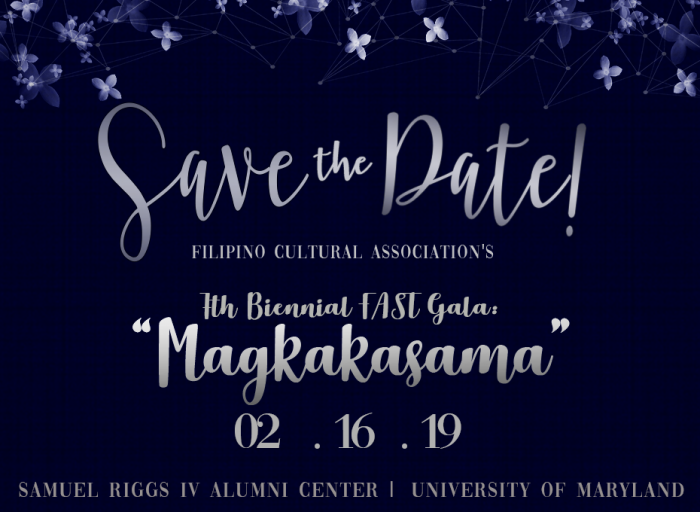 Every two years, the Filipino Cultural Association (FCA) hosts the Filipino American Studies (FAST) Gala. This biennial gala both celebrates the creation and supports the continuation of the FAST class at the University of Maryland, College Park. The class will have been taught for 12 years starting in 2019. It has also contributed to scholarships in honor of Filipino community leaders to help students continue forward with their studies.

This year’s gala will be held at Orem Hall in the Samuel Riggs IV Alumni Center on February 16, 2019. The theme for the gala is Magkakasama (Togetherness) as it hopes to bring together the Filipino and Filipino-American community in the Washington, D.C. Metropolitan Area. The contributions made during this Gala will support Mabuhay, Inc. Descriptions and donation forms of both are included on this page.

The featured speaker this year is Jon Melegrito, the Executive Secretary of the Filipino Veterans Recognition & Education Project (FilVetREP), a community-based, all volunteer national initiative whose mission is to raise awareness about the service of Filipino World War II veterans. A son of a USAFFEE soldier who endured the Bataan Death March, Jon Melegrito has been part of national efforts to obtain justice and recognition for Filipino veterans. A community activist for many years, he was the first Executive Director of the National Federation of Filipino American Associations (NaFFAA) when it was founded in 1997. Prior to his service at NaFFAA, he worked for an international labor union (AFSCME) and the George Washington University, where he served as an advisor to the Philippine Cultural Society.

Now retired, he spends most of his time volunteering (Meals on Wheels, Tanghalang Pilipino, Philippine American Foundation for Charities), editing Manila Mail and writing for various publications. He received his Master’s Degree in Journalism and Public Affairs at American University.

*Note: Students must show their school ID at the door.

If you would like, you can also donate to help fund this year’s Gala! All donations are greatly appreciated!