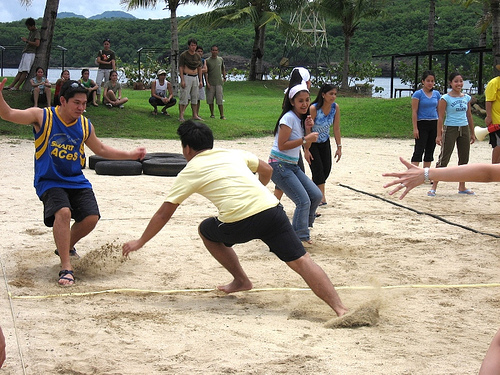 Playing patintero, a popular traditional game in the Philippines

In the Philippines, the youth spend countless hours playing traditional games at home, on the streets, or at local neighborhood parks and festivals. Due to the limited resources and lack of toys for children, several traditional games have been invented that require nothing more than yourself. Usually, these traditional games will test the children’s ability to be flexible, think, or act quickly. These games are typically referred to as “Laro ng Lahi,” a term coined by the Samahang Makasining Artist Club, Inc. (also known as “Makasining”) which means “games of our culture.”

Despite the recent rise of technology, traditional games are still played across the Philippines and the rest of the world. In many urban and rural areas in the Philippines, a great majority of Filipino children still play outdoor street games. Currently, there are over 38 known Filipino traditional games, with some of the most popular games being patintero, piko, tumbang preso, and pukana.

Don’t know what these games are or how to play them? Read on and learn more about a few Filipino traditional games!

Patintero: One of the most commonly played traditional games in the Philippines. The only required items are chalk to mark lines on the ground and a time-tracking device to keep a time limit. The game works by having 2 teams with 5 players each try to cross the other team’s lines, which are usually guarded by that team’s designated guards. It’s similar to capture the flag but is much less complex and a fun, simple game played by many children in the Philippines.

Luksong-Baka: This game is similar to leapfrog in the sense that one player must crouch while the other players jump over their heard. However, Luksong-Baka is different in that the crouching players must gradually stand up as the game progresses, making it harder for the other players to jump over them. If any players fail to hop over the crouched player, they may take over as the next crouched player.

Luksong-Tinik: This game has a similar name and concept to the previous game, Luksong-Baka. However, in Luksong-Tinik, 2 players serve as the base of the tinik (thorn) by putting their right and left feet stacked together on top of each other, creating an obstacle for the other players to hop over. A starting point is set, then the height of the obstacle is increased as players successfully hop over the tinik.

Palosebo: This game involves a greased bamboo pole and a prize attached to the top of the pole for the winner to keep. This game is commonly played at local festivals, mostly in the provinces. The objective of the game is for each player to attempt to climb the greased bamboo pole and reach the top of the pole, where their prize will be waiting for them.

Chinese Garter: This game involves 2 players holding a stretched garter, or any long piece of string/fabric, horizontally while the other players attempt to hop over it. The garter is initially held at the ankle level of the players, increasing in height as players successfully hop over the garter. By the end, the garter can be as high as the players’ heads, making it an extreme challenge for them.

These are only a few of the 38+ Filipino traditional games played daily by countless children in the Philippines, but if you’d like to learn a bit more about the several other games, check this website out!